Late Sunday evening my husband and I had finished a fencing project to restore a pasture that had been unusable for the last couple years.  Lucy and the donkeys were excited to be in the middle of lush grass and quickly got to work on it.  I made sure they could see where the gate was so they could get back up to the barn in the night when they were ready to come in.

In the morning I was rather concerned to see that they had not come in for the night and were in fact almost cowering in a corner behind some brush.  I went out to see what on earth was going on and quickly noticed hundreds of bees buzzing around my head, and luckily looked down before I stepped on the swarm.

I have experienced honey bees swarming or bee balls before and know that they typically move on rather quickly and to just steer clear until they do.  These guys however picked the WORST spot imaginable to me, by blocking my brand new gate.  I am fairly certian they hadn’t been there when we finished the fence, because I literally would have had to step over them in order to open the gate from the inside like I did. 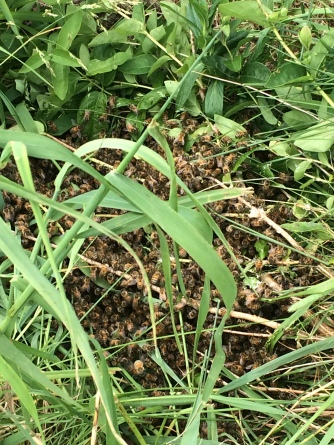 It was really odd to see them swarming on the ground though, but they weren’t aggressive and I was positive they were honey bees, so I contacted a friend who is a new bee keeper, who put me in touch with an experienced bee keeper.  She was also surprised that the bees were on the ground, but it appeared that there was a hole in the ground they could have decided to make a home.

Bees swarm for two main reasons.  One, their hive has been destroyed or two, their hive has gotten very large and a new queen hatched.  One of the queens leaves the hive taking part of the colony with her.

Since the bee keeper was unable to get to my house for a few hours she instructed me to place a cardboard box over the swarm to help keep them in the spot and hopefully pull them out of the ground.

I used all my courage throwing this box over the bees and quickly retreated to take this picture.  I had even called my Mom to stand by her phone in case I was attacked.  But, I had nothing to fear after all.

Now surrounding this, we were also trying to get our hay up out of the field, I have experienced a lot of weather and mechanical related issues that delayed haying, but this was a first for me!  Luckily these little guys were not in a location that affected us, other than the fact I was running around looking for boxes and taking pictures!

A few hours later my heroic bee keeper arrived to see what was going on and to capture the bees.  This woman is fearless in my book!  She just strolled up to those bees and started checking things out!  She and I both did wear the snazzy hats though! 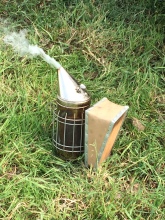 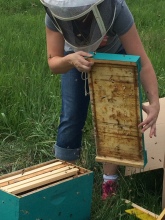 The cardboard box worked really well and had collected the majority of the bees that had been previously on the ground.  It appeared that they had initially balled up on a very very small bush/tree that had either collapsed under their weight or had been stepped on by the horse.

Next the bee keeper literally banged the bees into the hive that she brought, just picked up the box and knocked them into the hive!  I was still backing up, but trying to stay close enough to get pictures!

Since it was the middle of the afternoon there were likely a lot of worker bees that were out foraging.  The hive was also very active, especially since they had just been stirred up.  The bee keeper told me that she would come back late in the evening when most of the workers should be back and things have quieted down.

It had, and there were still a few bees that hadn’t moved into the box, but it appeared that we had gotten the queen moved inside because the workers were definitely going into the hive with purpose, where as the ones that were remaining in the box were just kind of there.

She decided that enough of the bees had made it into the hive, and realistically knew we would not be able to get them all, but estimated we had captured roughly 20,000 bees to re-home!  We left the card board box overnight just in case we were missing more of the swarm than initially thought.  She stuffed a towel in the opening of the hive and took them off to their new home!

It was very interesting experience and I learned a lot!  One of the neatest things was seeing the new honey combs they were starting to build.  Did you know bees wax when it is brand new is white?

Bees wax when it is first made is white!  This swarm was trying to set up shop on this tiny branch

The best part (next to rescuing the bees) was being rewarded with some gorgeous local honey!

I strongly encourage you to contact a bee keeper should you ever find yourself in a similar situation.  Honey bees are not aggressive, and do the world such a large service.  Not only are we able to harvest delicious honey to eat, but they are also responsible for the pollination the occurs that makes the rest of our food possible!  Honey bees are in extreme danger of becoming extinct, which would put the world in jeopardy.  Bee keepers,  honey farmers, hivers, apiarists,  whatever you like to call them, are all more than willing to come rescue you from a stray swarm of bees!

Post Script:  When I checked on the box this morning there were only a few more bees than were left from the night before.  Unfortunately these bees will not survive long without their queen, but there are not enough to risk moving a queen and her hive and having them swarm again.